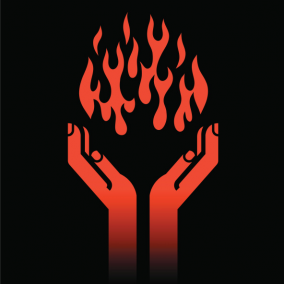 The Blackstar of Prometheus- is a colossal, socially progressive nation, ruled by Prometheus with an iron fist, and renowned for its complete lack of prisons, absence of drug laws, and devotion to social welfare. The hard-nosed, hard-working, cynical population of 8.056 billion Prometheusians are proud of their wide-ranging civil freedoms, and those who aren't tend to be dragged off the streets by men in dark suits and hustled into cars with tinted windows.

The large, liberal government juggles the competing demands of Administration, Welfare, and Education. It meets to discuss matters of state in the capital city of Mount Olympus. Citizens pay a flat income tax of 40.0%.

The Prometheusian economy, worth 412 trillion Fires a year, is fairly diversified and led by the Trout Farming industry, with major contributions from Book Publishing, Cheese Exports, and Beef-Based Agriculture. Average income is 51,257 Fires, with the richest citizens earning 6.8 times as much as the poorest.

Convicts released after being found "wrongfully imprisoned" are surprisingly chill about the whole thing, government-run brothels can be found on every street corner, cyber-crime and tin-foil hat sales are both increasing at record rates, and arthritic surgeons with tremulous fingers reassure patients that they are in safe hands. Crime is relatively low. Prometheus-'s national animal is the Eagle, which soars majestically through the nation's famously clear skies, and its national religion is Prometheusism.

Prometheus- is ranked 43,118th in the world and 5th in Lasagna for Highest Economic Output, with 412 trillion Standard Monetary Units.