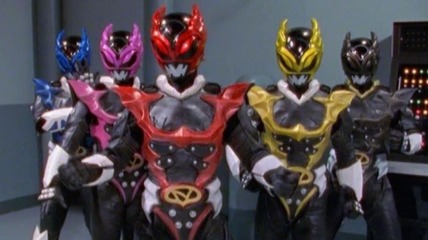 The Sentai Team of PR In Space is a massive, orderly nation, ruled by Andros with an iron fist, and renowned for its ubiquitous missile silos, smutty television, and suspicion of poets. The hard-nosed, hard-working, cynical, humorless, devout population of 2.852 billion Rangers are ruled by a mostly-benevolent dictator, who grants the populace the freedom to live their own lives but watches carefully for anyone to slip up.

The medium-sized, corrupt, well-organized government juggles the competing demands of Administration, Education, and Industry. It meets to discuss matters of state in the capital city of Angel Grove. The average income tax rate is 73.2%.

The frighteningly efficient Power Ranger economy, worth 532 trillion coins a year, is mostly comprised of black market activity, especially in Gambling, Arms Manufacturing, Uranium Mining, and Soda Sales. Average income is an impressive 186,640 coins, and evenly distributed, with the richest citizens earning only 4.5 times as much as the poorest.

Huge explosions in the sky are a daily occurrence in the cities, prospective secessionists nervously declare how worthless and unimportant they are, the navy's new flotilla is gonna be a thrilla, and the nation won three wars against Brancaland this weekend. Crime, especially youth-related, is moderate. PR In Space's national animal is the zord, which is also the nation's favorite main course, and its national religion is Cards.