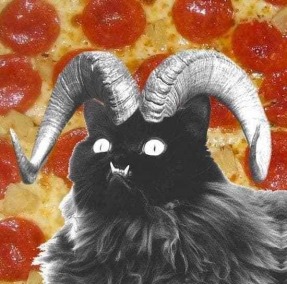 The Community of Pizza devil cat is a massive, socially progressive nation, remarkable for its daily referendums, anti-smoking policies, and stringent health and safety legislation. The compassionate, democratic population of 4.8 billion Pizza cat devils are fiercely patriotic and enjoy great social equality; they tend to view other, more capitalist countries as somewhat immoral and corrupt.

The enormous, socially-minded government juggles the competing demands of Education, Healthcare, and Administration. The average income tax rate is 95.2%.

The frighteningly efficient Pizza cat devil economy, worth 574 trillion nopes a year, is driven entirely by a combination of government and state-owned industry, with private enterprise illegal. The industrial sector is mostly made up of the Information Technology industry. Average income is an impressive 119,664 nopes, and distributed extremely evenly, with practically no difference between the richest and poorest citizens.

Raver DJ XStacy holds multiple medical degrees in chillaxing, the government prides itself on being smug and condescending to idiots, international collectors know that a grease-stain on a work of art probably means it's passed through Pizza devil cat, and visitors often mistake the toiletplex at music festivals for the main stage. Crime, especially youth-related, is totally unknown, thanks to a capable police force and progressive social policies in education and welfare. Pizza devil cat's national animal is the ant, which frolics freely in the nation's many lush forests.

Pizza devil cat is ranked 5,283rd in the world and 176th in The East Pacific for Healthiest Citizens, with 19.38 bananas ingested per day.