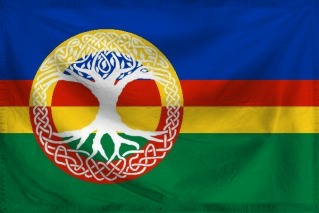 The Determined Land of Piloria is a gargantuan, environmentally stunning nation, ruled by the Moon Lord with a fair hand, and notable for its complete lack of prisons, punitive income tax rates, and restrictive gun laws. The compassionate, democratic, cheerful population of 12.781 billion Pilorians enjoy a sensible mix of personal and economic freedoms, while the political process is open and the people's right to vote held sacrosanct.

The enormous government juggles the competing demands of Education, Environment, and Industry. It meets to discuss matters of state in the capital city of Neo Olde Tokyo. The income tax rate is 100%.

The frighteningly efficient Pilorian economy, worth a remarkable 3,311 trillion Polpettans a year, is driven entirely by a combination of government and state-owned industry, with private enterprise illegal. The industrial sector, which is highly specialized, is mostly made up of the Information Technology industry, with major contributions from Tourism and Book Publishing. Average income is an amazing 259,092 Polpettans, and distributed extremely evenly, with little difference between the richest and poorest citizens.

Psychiatrists that date patients are congratulated on their romantic conquests, hospitals in Piloria are too busy serving the needs of Yggdrasil to see Pilorians, the studies of art and philosophy are banned, and racial supremacists indulge their wildest fantasies in cinemas and theatres across the nation. Crime is totally unknown, thanks to a well-funded police force and progressive social policies in education and welfare. Piloria's national animal is the Gorillama, which frolics freely in the nation's many lush forests.

Piloria is ranked 745th in the world and 7th in Yggdrasil for Highest Food Quality, scoring 333.58 on the Meeshlin-Starr Index.

Most Recent Government Activity: 34 days ago