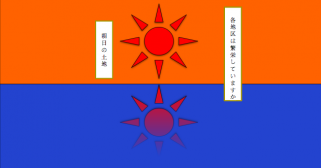 The Imperial State of Piikala is a colossal, cultured nation, ruled by 太陽神 with a fair hand, and remarkable for its parental licensing program, keen interest in outer space, and irreverence towards religion. The compassionate, democratic, humorless population of 6.65 billion サンの人々 are fiercely patriotic and enjoy great social equality; they tend to view other, more capitalist countries as somewhat immoral and corrupt.

The large, socially-minded government juggles the competing demands of Education, Administration, and Environment. It meets to discuss matters of state in the capital city of 帝国の本拠地. The average income tax rate is 96.9%.

The frighteningly efficient 太陽の人々 economy, worth a remarkable 1,337 trillion ピカラン円s a year, is driven entirely by a combination of government and state-owned industry, with private enterprise illegal. The industrial sector, which is quite specialized, is led by the Information Technology industry, with significant contributions from Tourism, Arms Manufacturing, and Beef-Based Agriculture. Average income is an amazing 201,174 ピカラン円s, and distributed extremely evenly, with practically no difference between the richest and poorest citizens.

Politicians stage photo ops featuring barely functional fighter jets, it is a silent spring in Piikala, public footpaths are being slowly eroded by the burgeoning number of ramblers, and EpiPen sales have skyrocketed. Crime, especially youth-related, is totally unknown, thanks to a capable police force and progressive social policies in education and welfare. Piikala's national animal is the ハワイの鷹, which is also the nation's favorite main course, and its national religion is 神道.