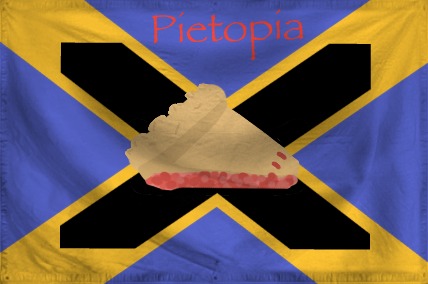 The Kingdom of Pietopia is a gargantuan, environmentally stunning nation, ruled by Pine Apple Smoothie with an even hand, and remarkable for its national health service, complete lack of prisons, and punitive income tax rates. The hard-nosed, humorless population of 19.459 billion Almond-Milkieses have some civil rights, but not too many, enjoy the freedom to spend their money however they like, to a point, and take part in free and open elections, although not too often.

The enormous, corrupt government prioritizes Education, with Environment, Law & Order, and Healthcare also on the agenda, while Spirituality isn't funded at all. It meets to discuss matters of state in the capital city of Green-Apple. The average income tax rate is 96.9%.

The frighteningly efficient Pietopian economy, worth a remarkable 3,538 trillion Fishtusks a year, is quite specialized and led by the Information Technology industry, with significant contributions from Arms Manufacturing and Tourism. State-owned companies are common. Average income is an impressive 181,869 Fishtusks, and distributed extremely evenly, with little difference between the richest and poorest citizens.

The family summer vacation has become a thing of the past following the introduction of the year-round school year, schools have extensive counseling programs for troubled students, heavy industry must go to expensive lengths to dispose of waste, and the official Pietopian Phrase Book weighs as much as a small child. Crime, especially youth-related, is totally unknown, thanks to a very well-funded police force and progressive social policies in education and welfare. Pietopia's national animal is the Namuh, which frolics freely in the nation's many lush forests.