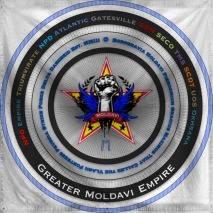 The Emeritus Augustus Pacificus of Pierconium is a gargantuan, efficient nation, ruled by Ivan Moldavi with an iron fist, and renowned for its closed borders, frequent executions, and compulsory military service. The hard-nosed, hard-working, cynical, humorless, devout population of 26.825 billion Pacificans are ruled by a mostly-benevolent dictator, who grants the populace the freedom to live their own lives but watches carefully for anyone to slip up.

The government — a sprawling, bureaucracy-choked, corrupt, well-organized morass — juggles the competing demands of Defense, Law & Order, and Environment. It meets to discuss matters of state in the capital city of Stromholde. The average income tax rate is 87.4%.

The powerhouse Pierconiumian economy, worth a remarkable 2,020 trillion Denarii a year, is extremely specialized and solely comprised of the Arms Manufacturing industry. Average income is 75,303 Denarii, and evenly distributed, with the richest citizens earning only 4.2 times as much as the poorest.

Pierconium's free colleges struggle to maintain standards in the face of overwhelming demand, 'Police Academy 36' and 'Sharknados On A Plane' are vying for top spot at the box-office, the government is a law unto itself, and the military patrols the streets in search of possible secessionists. Crime, especially youth-related, is totally unknown, thanks to the all-pervasive police force and progressive social policies in education and welfare. Pierconium's national animal is the Drachul, which is also the nation's favorite main course, and its national religion is Moldavism.

Pierconium is ranked 204,366th in the world and 7,437th in the Pacific for Largest Automobile Manufacturing Sector, scoring -18.06 on the Henry Ford Productivity Index.

The Grand Duchy of Yurstonstan,

The Socialist Peoples Republic of Merka,

The United Nations Of Democracy,

The Seeker of Power,

Federation of the Astral Plane,

Salton Republic, and 25 others.