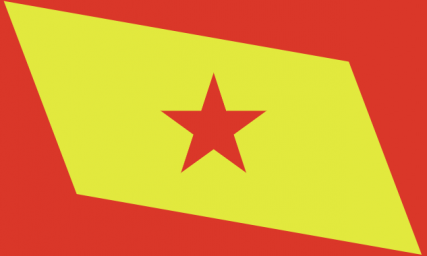 The Red Republic of Pertsjan is a gargantuan, safe nation, ruled by Chairman Artyenki with a fair hand, and renowned for its ban on automobiles, daily referendums, and punitive income tax rates. The compassionate, democratic, cheerful population of 10.377 billion Pertsjanians are free to do what they want with their own bodies, and vote for whomever they like in elections; if they go into business, however, they are regulated to within an inch of their lives.

The enormous, socially-minded, outspoken government juggles the competing demands of Education, Environment, and Healthcare. It meets to discuss matters of state in the capital city of Tolbhuran. The average income tax rate is 98.9%.

The frighteningly efficient Pertsjanian economy, worth a remarkable 1,822 trillion Virtual Gold Bars a year, is driven entirely by a combination of government and state-owned industry, with private enterprise illegal. The industrial sector, which is highly specialized, is mostly made up of the Information Technology industry, with significant contributions from Tourism and Book Publishing. Average income is an impressive 175,673 Virtual Gold Bars, and distributed extremely evenly, with practically no difference between the richest and poorest citizens.

Chairman Artyenki can often be found attempting to coax random citizens' cats down from trees, abortions are routinely performed in the nation's hospitals, on-duty Air Pertsjan flight attendants are usually seen napping in first class, and the needs of the living outweigh the needs of the dead. Crime, especially youth-related, is totally unknown, thanks to a capable police force and progressive social policies in education and welfare. Pertsjan's national animal is the Ghost of Karl Marx, which frolics freely in the nation's many lush forests.

Pertsjan is ranked 5,778th in the world and 30th in The Internationale for Most Advanced Public Transport, scoring 4,240.02 on the Societal Mobility Rating.

The Commune of Meddle,

The Anarchist Communes of Kropotkinstan, and