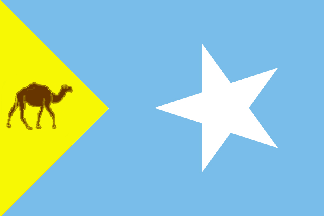 The Free Land of Pax Somaliana is a gargantuan, safe nation, ruled by the President with an even hand, and notable for its compulsory military service, public floggings, and daily referendums. The democratic, devout population of 14.654 billion Somalians have some civil rights, but not too many, enjoy the freedom to spend their money however they like, to a point, and take part in free and open elections, although not too often.

The large government prioritizes Law & Order, although Defense, Education, and Spirituality are also considered important, while Environment and Industry aren't funded at all. It meets to discuss matters of state in the capital city of Mogadishu. The average income tax rate is 66.9%.

The large but underdeveloped Somalian economy, worth 719 trillion Shekels a year, is led by the Retail industry, with major contributions from Woodchip Exports, Uranium Mining, and Furniture Restoration. State-owned companies are reasonably common. Average income is 49,074 Shekels, and evenly distributed, with the richest citizens earning only 3.2 times as much as the poorest.

Unpopular politicians are often caught between a rock and a hard place, death row inmates cower in fear at the phrase "one-year anniversary", people who have had childhood imaginary friends are told they can't ever be trusted with guns, and farting etiquette is taught in schools. Crime, especially youth-related, is totally unknown, thanks to the all-pervasive police force and progressive social policies in education and welfare. Pax Somaliana's national animal is the Camel, which is also the nation's favorite main course.

Pax Somaliana is ranked 41,936th in the world and 2nd in Reality for Most Primitive, scoring 52.85 on the Scary Big Number Scale.