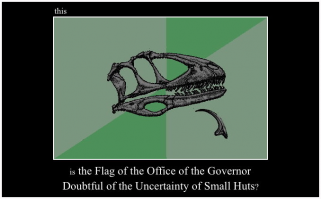 The Uncertainty of Parva Casas is a gargantuan, cultured nation, ruled by Anceps Governor Nescio with an even hand, and notable for its compulsory military service, irreverence towards religion, and stringent health and safety legislation. The quiet, industrious population of 14.254 billion Moramini are fiercely patriotic and enjoy great social equality; they tend to view other, more capitalist countries as somewhat immoral and corrupt.

The large, socially-minded government juggles the competing demands of Education, Law & Order, and Public Transport. It meets to discuss matters of state in the capital city of Miremini. The average income tax rate is 50.4%, and even higher for the wealthy.

The large but underdeveloped Moramini economy, worth 435 trillion Crustas a year, is driven entirely by a combination of government and state-owned industry, with private enterprise illegal. The industrial sector, which is broadly diversified, is led by the Beef-Based Agriculture industry, with major contributions from Tourism, Book Publishing, and Trout Farming. Average income is 30,568 Crustas, and distributed extremely evenly, with little difference between the richest and poorest citizens.

The Finance Ministry posts hourly updates on where taxpayer money is spent, the government raises tariffs on a weekly basis, birth rates have hit an all-time low, and the government is giving peace a chance. Crime, especially youth-related, is totally unknown, thanks to a well-funded police force and progressive social policies in education and welfare. Parva Casas's national animal is the ostriferi fauces, which is also the nation's favorite main course.

Parva Casas is ranked 156,051st in the world and 21st in Nasicournia for Most Scientifically Advanced, scoring 54.16 on the Kurzweil Singularity Index.