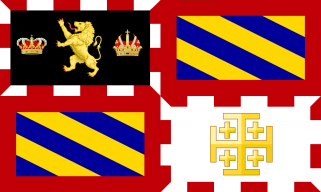 The Holy Imperium of Ostermarch is a colossal, efficient nation, ruled by Maximilian with an iron fist, and notable for its keen interest in outer space, ubiquitous missile silos, and suspicion of poets. The hard-nosed, hard-working, cynical, humorless, devout population of 7.48 billion Imperials are kept under strict control by the oppressive government, which measures its success by the nation's GDP and refers to individual citizens as "human resources."

The medium-sized, corrupt, well-organized government juggles the competing demands of Defense, Law & Order, and Industry. It meets to discuss matters of state in the capital city of El Escorial. The average income tax rate is 91.0%, and even higher for the wealthy.

The frighteningly efficient Imperial economy, worth a remarkable 3,232 trillion crowns a year, is broadly diversified and mostly comprised of black market activity, especially in Arms Manufacturing, Information Technology, Retail, and Woodchip Exports. State-owned companies are reasonably common. Average income is an amazing 432,125 crowns, and evenly distributed, with the richest citizens earning only 2.8 times as much as the poorest.

Diplomats shake hands with their right and hide a poison dagger in their left, foreign leaders' Twitcher accounts are monitored for potential threats to national security, flipping a coin to make a decision leads to a referral to Gambling Addiction Services, and conscientious objectors are hanged as traitors. Crime, especially youth-related, is totally unknown, thanks to a very well-funded police force and progressive social policies in education and welfare. Ostermarch's national animal is the demigryph, which teeters on the brink of extinction due to widespread deforestation, and its national religion is Imperial Cult.

Greate San Marino, and 65 others.

The Seven Provinces, and