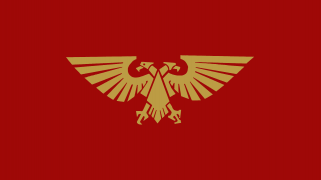 The Imperium of
Of mannn
Corporate Police State
Suffer not the alien to live.
The God Emperor of Mankind
Influence
Shoeshiner
Region
The West Pacific
Civil Rights
Unheard Of
Economy
Frightening
Political Freedom
Unheard Of

The Imperium of Of mannn is a colossal, orderly nation, ruled by The God Emperor of Mankind with an iron fist, and renowned for its closed borders, pith helmet sales, and free-roaming dinosaurs. The hard-nosed, hard-working, cynical, humorless, devout population of 6.266 billion Humans are ruled with an iron fist by the corrupt, dictatorship government, which oppresses anyone who isn't on the board of a Fortune 500 company. Large corporations tend to be above the law, and use their financial clout to gain ever-increasing government benefits at the expense of the poor and unemployed.

The medium-sized, corrupt, moralistic, well-organized government is primarily concerned with Defense, although Law & Order, Industry, and Spirituality are also considered important, while Environment and Welfare aren't funded at all. It meets to discuss matters of state in the capital city of Holy Terra. Citizens pay a flat income tax of 89.1%.

The frighteningly efficient Human economy, worth a remarkable 2,973 trillion Thrones a year, is broadly diversified and mostly comprised of black market activity, especially in Arms Manufacturing, Uranium Mining, Retail, and Woodchip Exports. Average income is an amazing 474,566 Thrones, but there is a vast disparity between incomes, with the richest 10% of citizens earning 3,752,775 per year while the poor average 14,638, a ratio of 256 to 1.

Fast-food chefs regularly win Health Innovation Awards for spitting on burgers, teddy bear James Dean (aka "the Rebel Without the Claws") helps convince kids that candy cigarettes are cool, immigrant herding has become a national pastime, and vacationing Humans expect to be treated as royalty. Crime, especially youth-related, is totally unknown, thanks to a capable police force. Of mannn's national animal is the Aquila, which is also the nation's favorite main course, and its national religion is Cult imperialis - Cult Mechanicus.

Of mannn is ranked 15,916th in the world and 468th in the West Pacific for Most Influential, scoring 3,167 on the Soft Power Disbursement Rating.