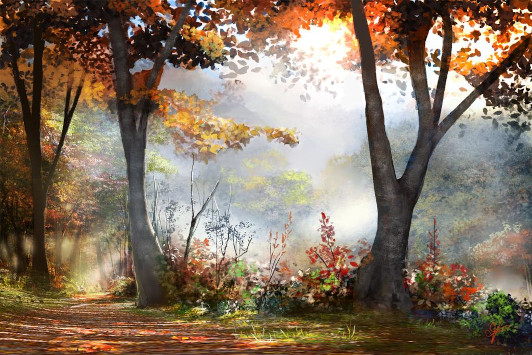 The Hundred Oaker Forest of Oaks 12 is a massive, efficient nation, notable for its fear of technology, daily referendums, and suspicion of poets. The hard-nosed, humorless, devout population of 4.556 billion Oaks 12ians are fiercely patriotic and enjoy great social equality; they tend to view other, more capitalist countries as somewhat immoral and corrupt.

The large, corrupt, socially-minded government juggles the competing demands of Law & Order, Industry, and Administration. The average income tax rate is 73.3%, and even higher for the wealthy.

The frighteningly efficient Oaks 12ian economy, worth 504 trillion planets a year, is driven entirely by a combination of government and state-owned industry, with private enterprise illegal. However, for those in the know, there is a large, well-organized black market in Arms Manufacturing, Woodchip Exports, Uranium Mining, and Information Technology. The private sector mostly consists of enterprising ten-year-olds selling lemonade on the sidewalk, but the government is looking at stamping this out. Average income is an impressive 110,777 planets, and distributed extremely evenly, with practically no difference between the richest and poorest citizens.

The nation is currently revamping its entire education system, the Oaks 12ian war navy contains an oddly large number of luxury yachts and cruise liners, the words 'private' and 'enterprise' must never appear in the same sentence, and the mood of raunchy movies is often ruined by the sound of babies crying. Crime, especially youth-related, is totally unknown, thanks to the all-pervasive police force and progressive social policies in education and welfare. Oaks 12's national animal is the falcon, which teeters on the brink of extinction due to toxic air pollution.