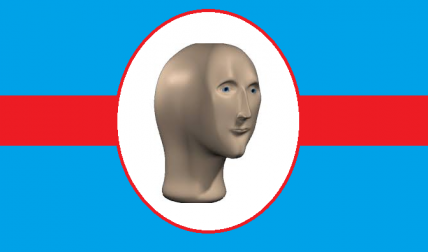 The Memery of North Cromch is a massive, cultured nation, ruled by Meme Man with an even hand, and notable for its museums and concert halls, national health service, and free-roaming dinosaurs. The compassionate, hard-working, democratic population of 2.253 billion North Cromchians have some civil rights, but not too many, enjoy the freedom to spend their money however they like, to a point, and take part in free and open elections, although not too often.

The medium-sized government juggles the competing demands of Education, Welfare, and Administration. It meets to discuss matters of state in the capital city of Super-Dank-Polis. The average income tax rate is 67.0%, and even higher for the wealthy.

The all-consuming North Cromchian economy, worth 257 trillion Cronches a year, is broadly diversified and led by the Tourism industry, with significant contributions from Information Technology, Book Publishing, and Beef-Based Agriculture. Average income is an impressive 114,466 Cronches, and evenly distributed, with the richest citizens earning only 2.0 times as much as the poorest.

Only vaccinated citizens may have free healthcare, 'To Regulate And Beyond' is the unofficial motto of the North Cromchian Space Agency, immigrants who carry knives on them are presumed to be chefs, and asking 'does my bum look big in this?' leads to 30 hours of self-esteem classes. Crime is totally unknown, thanks to a capable police force and progressive social policies in education and welfare. North Cromch's national animal is the Gobolgobgalablab, which frolics freely in the nation's many lush forests.

North Cromch is ranked 176,728th in the world and 32nd in Lardyland for Greatest Rich-Poor Divides, with 1.96 Rich To Poor Income Ratio.