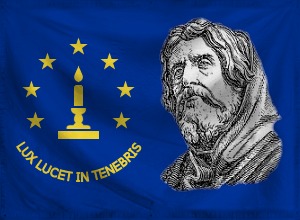 The Ancient Waldensian Republic of New Sequoyah is a gargantuan, efficient nation, ruled by Stand Watie with a fair hand, and remarkable for its daily referendums, public floggings, and compulsory military service. The hard-nosed, hard-working, democratic, devout population of 10.396 billion New Sequoyians are effectively ruled by a group of massive corporations, who run for political office and provide their well-off citizens with world-class goods and services. Their poorer citizens, however, are mostly starving to death while being urged to go out and get real jobs. The populace has reasonably extensive civil rights, although these are mostly aimed at allowing them to buy whatever they like.

The relatively small, outspoken government juggles the competing demands of Defense, Spirituality, and Law & Order. It meets to discuss matters of state in the capital city of Keetowah. The average income tax rate is 8.8%.

The all-consuming New Sequoyahian economy, worth 971 trillion Eagles a year, is broadly diversified and led by the Arms Manufacturing industry, with major contributions from Automobile Manufacturing, Pizza Delivery, and Retail. Average income is 93,426 Eagles, with the richest citizens earning 5.0 times as much as the poorest.

School plays were recently banned due to concerns of child endangerment, the country is rumored to be a Brancalandian puppet state, truncheon-mounted cameras record the beating of criminals in dynamic HD detail, and stoned tourists don't tend to remember much about their holidays here. Crime, especially youth-related, is totally unknown, thanks to a well-funded police force. New Sequoyah's national animal is the Bison, which is also the nation's favorite main course.

New Sequoyah is ranked 25,527th in the world and 9th in Right to Life for Rudest Citizens, with 95.59 Insults Per Minute.