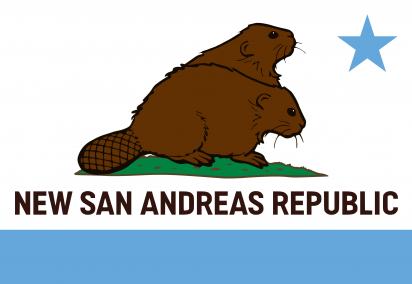 The Fallout-GTA Extravaganza of New San Andreas Republic is a massive, efficient nation, ruled by NSAR President Jack 'Jock' Cranley with an even hand, and remarkable for its sprawling nuclear power plants, irreverence towards religion, and complete absence of social welfare. The hard-nosed, hard-working population of 1.032 billion NSAR citizens have some civil rights, but not too many, enjoy the freedom to spend their money however they like, to a point, and take part in free and open elections, although not too often.

The relatively small government juggles the competing demands of Defense, Education, and Industry. It meets to discuss matters of state in the capital city of Los Santos - The Boneyard. The average income tax rate is 11.2%.

The powerhouse NSAR economy, worth 85.2 trillion NSAR dollars a year, is broadly diversified and led by the Book Publishing industry, with major contributions from Gambling, Automobile Manufacturing, and Arms Manufacturing. Average income is 82,541 NSAR dollars, with the richest citizens earning 5.0 times as much as the poorest.

Protesters are up in arms over new nuclear power stations, New San Andreas Republic has designated Los Santos - The Boneyard as its capital city, NSAR President Jack 'Jock' Cranley has just been declared ruler of New San Andreas Republic in an international press conference, and the government has declined to declare any particular religion as its 'official' one. Crime, especially youth-related, is almost non-existent, thanks to a capable police force and progressive social policies in education and welfare. New San Andreas Republic's national animal is the two-headed beaver, which teeters on the brink of extinction due to widespread deforestation.

New San Andreas Republic is ranked 280,536th in the world and 13th in Calexico and Mexicali for Most Cultured, scoring 59 on the Snufflebottom-Wiggendum Pentatonic Scale.