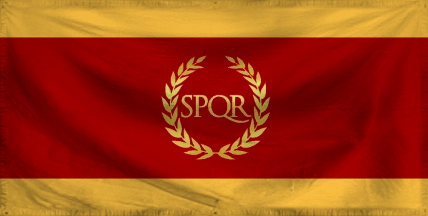 The Fabulous Democracy of New Roma Republic is a gargantuan, cultured nation, ruled by Gallus Paesentius Belletor with a fair hand, and notable for its compulsory military service, hatred of cheese, and stringent health and safety legislation. The compassionate, democratic, humorless population of 17.195 billion Romans are free to do what they want with their own bodies, and vote for whomever they like in elections; if they go into business, however, they are regulated to within an inch of their lives.

The large, liberal, outspoken government juggles the competing demands of Education, Defense, and Healthcare. It meets to discuss matters of state in the capital city of New Rome. The average income tax rate is 92.4%, and even higher for the wealthy.

The strong a Roman economy, worth a remarkable 2,349 trillion Pecuniams a year, is quite specialized and led by the Information Technology industry, with major contributions from Tourism, Book Publishing, and Arms Manufacturing. State-owned companies are reasonably common. Average income is an impressive 136,644 Pecuniams, and distributed extremely evenly, with little difference between the richest and poorest citizens.

'To Regulate And Beyond' is the unofficial motto of the a Roman Space Agency, a TV celebrity dominates the nation's newest democratic political party, election results are often delayed for weeks to count the expat votes, and international collectors know that a grease-stain on a work of art probably means it's passed through New Roma Republic. Crime is totally unknown, thanks to a capable police force and progressive social policies in education and welfare. New Roma Republic's national animal is the Eagle, which soars majestically through the nation's famously clear skies.

New Roma Republic is ranked 142,624th in the world and 2nd in Novae Terrae for Largest Gambling Industry, scoring 416.5 on the Kelly Criterion Productivity Index.