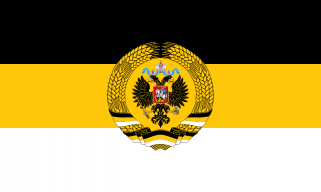 The Empire of New Elesar is a gargantuan, cultured nation, ruled by Emperor Dimitri II Yusupov with an iron fist, and renowned for its closed borders, zero percent divorce rate, and complete absence of social welfare. The hard-nosed, hard-working, cynical, devout population of 11.734 billion Elesarians are kept under strict control by the oppressive government, which measures its success by the nation's GDP and refers to individual citizens as "human resources."

The enormous, corrupt, well-organized government juggles the competing demands of Law & Order, Defense, and Education. It meets to discuss matters of state in the capital city of Alexandrovsk. The average income tax rate is 87.9%, and even higher for the wealthy.

The frighteningly efficient New Elesarian economy, worth a remarkable 1,286 trillion Hryvnias a year, is quite specialized and mostly made up of the Arms Manufacturing industry, with significant contributions from Information Technology and Uranium Mining. Black market activity is rampant. State-owned companies are reasonably common. Average income is an impressive 109,609 Hryvnias, and distributed extremely evenly, with little difference between the richest and poorest citizens.

Satellite images show safe electoral constituencies in complete darkness, the television adaptation of Jennifer Government is the most popular program in the nation, the government seizes private property for the 'good of the people', and industry tycoons rarely hide their misdeeds due to the government's habit of bailing them out. Crime, especially youth-related, is totally unknown, thanks to the all-pervasive police force and progressive social policies in education and welfare. New Elesar's national animal is the Double Headed Eagle, which soars majestically through the nation's famously clear skies, and its national religion is Orthodox Christianity.

New Elesar is ranked 11,945th in the world and 4th in New Atlas for Most Developed, scoring 89.09 on the Human Development Index.