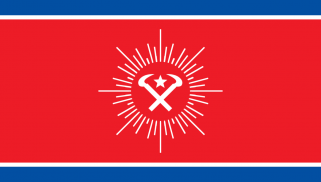 The Aprosia of New Aapelistan is a gargantuan, safe nation, ruled by Alí Hamaném with an even hand, and notable for its state-planned economy, irreverence towards religion, and devotion to social welfare. The hard-nosed population of 15.964 billion Aprosians are fiercely patriotic and enjoy great social equality; they tend to view other, more capitalist countries as somewhat immoral and corrupt.

The enormous government juggles the competing demands of Law & Order, Healthcare, and Defense. It meets to discuss matters of state in the capital city of Dasharód. The average income tax rate is 76.3%, and even higher for the wealthy.

The large but inefficient Aprosian economy, worth 962 trillion Aprosian márks a year, is driven entirely by a combination of government and state-owned industry, with private enterprise illegal. However, for those in the know, there is a slick, highly efficient black market in Information Technology, Tourism, Woodchip Exports, and Arms Manufacturing. The private sector mostly consists of enterprising ten-year-olds selling lemonade on the sidewalk, but the government is looking at stamping this out. Average income is 60,316 Aprosian márks, and distributed extremely evenly, with little difference between the richest and poorest citizens.

Signs at the border tell international drivers where they can put their cars, theft is considered to be okay if the crime happened a long time ago, withdrawal of support for drug addicts is leaving many with cold sweats, and citizens volunteer for tax audits to avoid the 80-page Practical Assessment Survey Tool On Religions. Crime is totally unknown, thanks to a very well-funded police force and progressive social policies in education and welfare. New Aapelistan's national animal is the you, which frolics freely in the nation's many lush forests, and its national religion is Secular.

New Aapelistan is ranked 232,027th in the world and 222nd in The Western Isles for Fattest Citizens, with 8.35 Obesity Rate.