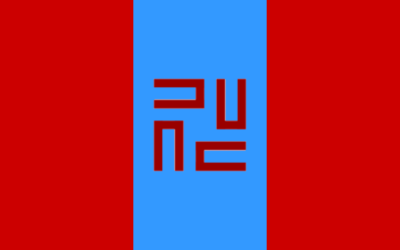 The Crown Plutocracy of Neuewland is a colossal, efficient nation, ruled by Schmidt Johnson with an iron fist, and remarkable for its keen interest in outer space, compulsory military service, and multi-spousal wedding ceremonies. The hard-nosed, hard-working, cynical, humorless population of 6.097 billion Neuewlanders are ruled with an iron fist by the corrupt, dictatorship government, which oppresses anyone who isn't on the board of a Fortune 500 company. Large corporations tend to be above the law, and use their financial clout to gain ever-increasing government benefits at the expense of the poor and unemployed.

The relatively small, corrupt, pro-business, well-organized government juggles the competing demands of Industry, Defense, and Law & Order. It meets to discuss matters of state in the capital city of Neuhamlet. Citizens pay a flat income tax of 64.6%.

The frighteningly efficient Neuewlandian economy, worth a remarkable 2,412 trillion Geltes a year, is broadly diversified and mostly comprised of black market activity, especially in Information Technology, Arms Manufacturing, Retail, and Uranium Mining. Average income is an amazing 395,616 Geltes, but there is a large disparity between incomes, with the richest 10% of citizens earning 1,872,645 per year while the poor average 49,424, a ratio of 37.9 to 1.

The streets are increasingly clogged with poverty-stricken beggars, the controversial show 'Who Wants to be an Immigrant?' has become wildly popular, colonial subjects have Neuewlandian culture shoved down their throats, and there's never a spare chair in the retirement home. Crime, especially youth-related, is totally unknown, thanks to a capable police force and progressive social policies in education and welfare. Neuewland's national animal is the Neuew Ground Squirrel, which is also the nation's favorite main course, and its national religion is Oceanism.

Neuewland is ranked 140,549th in the world and 184th in Anteria for Most Average, scoring 27.23 on the Average Standardized Normality Scale.