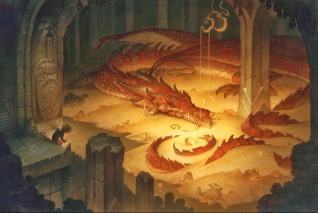 The King Under the Mountain of Neo Dragon is a gargantuan, socially progressive nation, ruled by Dragon King with a fair hand, and notable for its frequent executions, smutty television, and unlimited-speed roads. The hard-nosed, hard-working, democratic population of 22.435 billion Dragons hold their civil and political rights very dear, although the wealthy and those in business tend to be viewed with suspicion.

The enormous, outspoken government juggles the competing demands of Education, Environment, and Welfare. It meets to discuss matters of state in the capital city of Lonely Mountain Erebor. The average income tax rate is 75.9%.

The powerhouse a Dragon economy, worth a remarkable 2,169 trillion Dwarven Golds a year, is fairly diversified and dominated by the Tourism industry, with significant contributions from Book Publishing, Information Technology, and Arms Manufacturing. Average income is 96,680 Dwarven Golds, and evenly distributed, with the richest citizens earning only 3.9 times as much as the poorest.

The government spends more on chasing distant comets than on basic infrastructure, cyber-crime and tin-foil hat sales are both increasing at record rates, science centers and state of the art laboratories are ubiquitous, and the army spends more time producing 'romantic videos' than actually training soldiers. Crime, especially youth-related, is moderate, perhaps because of the country's complete lack of prisons. Neo Dragon's national animal is the Dragon-a-tron, which soars majestically through the nation's famously clear skies, and its national religion is Dragonism.