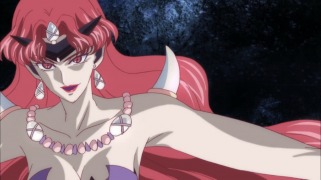 The Red Holy Empire of Negaverse is a gargantuan, efficient nation, ruled by Queen Beryl with an iron fist, and notable for its compulsory military service, complete lack of prisons, and complete absence of social welfare. The hard-nosed, hard-working, cynical, humorless, devout population of 15.442 billion Negaverseans are ruled with an iron fist by the corrupt, dictatorship government, which oppresses anyone who isn't on the board of a Fortune 500 company. Large corporations tend to be above the law, and use their financial clout to gain ever-increasing government benefits at the expense of the poor and unemployed.

The medium-sized, corrupt, moralistic, pro-business, well-organized government prioritizes Defense, with Law & Order and Industry also on the agenda, while Environment and Social Policy aren't funded at all. It meets to discuss matters of state in the capital city of The Dark Kingdom. Citizens pay a flat income tax of 57.5%.

The frighteningly efficient Negaversean economy, worth a remarkable 3,370 trillion Energies a year, is broadly diversified and dominated by the Arms Manufacturing industry, with significant contributions from Uranium Mining, Woodchip Exports, and Pizza Delivery. Black market activity is rampant. Average income is an amazing 218,260 Energies, but there is a vast disparity between incomes, with the richest 10% of citizens earning 2,002,273 per year while the poor average 2,506, a ratio of 798 to 1.

The country has been 'going shopping' by annexing nearby nations for their resources, the country is preparing for war, politicians are often seen with soldiers pointing guns at their heads, and absentminded citizens frequently converse with hallucinations. Crime, especially youth-related, is totally unknown, thanks to a well-funded police force. Negaverse's national animal is the Negamonsters, which is also the nation's favorite main course, and its national religion is Evilness.

Negaverse is ranked 10,011th in the world and 1st in The New British Empire for Lowest Crime Rates, with 94.78 Law-abiding Acts Per Hour.