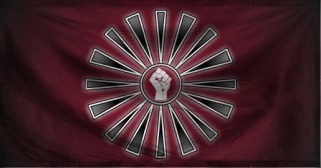 The Syndicated Corporations of Nedea is a gargantuan, efficient nation, ruled by Drake Fairtrade with an iron fist, and remarkable for its barren, inhospitable landscape, public floggings, and pith helmet sales. The hard-nosed, hard-working, cynical, humorless population of 22.505 billion Nedeans are rabid consumers, partly through choice and partly because the government tells them to and dissenters tend to vanish from their homes at night.

The minute, corrupt, pro-business, well-organized government, or what there is of one, prioritizes Defense, although Industry is also considered important, while Environment and Social Policy are ignored. It meets to discuss matters of state in the capital city of DarkHaven. Income tax is unheard of.

The frighteningly efficient Nedean economy, worth a remarkable 8,489 trillion Kredits a year, is driven almost entirely by the private sector, which is broadly diversified and led by the Arms Manufacturing industry, with major contributions from Information Technology, Retail, and Gambling. Average income is an amazing 377,229 Kredits, but there is an enormous disparity between incomes, with the richest 10% of citizens earning 2,237,293 per year while the poor average 29,277, a ratio of 76.4 to 1.

Some people will do literally anything to be in the spotlight, chewing tree bark proves to have limited value during childbirth, the people's love for Drake Fairtrade is little more than self-preservation, and engaged partners detail their fiancés' private lives in detail to prurient bureaucrats. Crime, especially youth-related, is all-pervasive, probably because of the absence of a police force. Nedea's national animal is the Pony, which teeters on the brink of extinction due to widespread deforestation.

Nedea is ranked 221,316th in the world and 16th in New Coalition of Nations for Healthiest Citizens, with 0.32 Bananas Ingested Per Day.