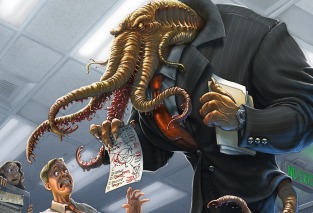 The Mad Empire of Nakina Koreazu is a gargantuan, efficient nation, ruled by Nakina Zorwyn with an iron fist, and notable for its sprawling nuclear power plants, flagrant waste-dumping, and complete absence of social welfare. The hard-nosed, hard-working, cynical, humorless, devout population of 26.786 billion Idiots are kept under strict control by the oppressive government, which measures its success by the nation's GDP and refers to individual citizens as "human resources."

The relatively small, corrupt, moralistic, well-organized government is effectively ruled by the Department of Defense, with Spirituality also on the agenda, while Social Policy and Environment receive no funds. It meets to discuss matters of state in the capital city of Ilragorn. Citizens pay a flat income tax of 20.9%.

The frighteningly efficient Idiotic economy, worth an astonishing 16,998 trillion blood bags a year, is fairly diversified and led by the Arms Manufacturing industry, with significant contributions from Gambling, Uranium Mining, and Woodchip Exports. Black market activity is rampant. Average income is a breathtaking 634,599 blood bags, but there is an enormous disparity between incomes, with the richest 10% of citizens earning 3,711,077 per year while the poor average 50,936, a ratio of 72.9 to 1.

Diabetics find the contents of their medications hard to stomach, military doctrine says not to open fire until you see the "beady little eyes" of Johnny Foreigner, foreign leaders who don't applaud Nakina Zorwyn's speeches are regarded as enemies of Nakina Koreazu, and university graduates and new home-owners toil in labour camps to work off their debts. Crime, especially youth-related, is totally unknown, despite the fact that it is difficult to make it through a day without breaking one of the country's many laws. Nakina Koreazu's national animal is the god, which teeters on the brink of extinction due to widespread deforestation, and its national religion is cult of cthulhu.

Nakina Koreazu is ranked 259,082nd in the world and 4th in the realm of insanity for Largest Welfare Programs, scoring -90.33 on the Safety Net Mesh Density Rating.