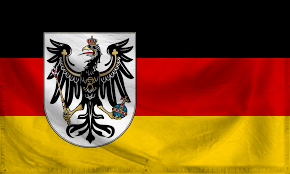 The Armed Republic of My New-Germany is a colossal, cultured nation, ruled by Chancellor Schmidt with an iron fist, and renowned for its ubiquitous missile silos, strictly enforced bedtime, and parental licensing program. The hard-nosed, hard-working, cynical, humorless, devout population of 7.154 billion Germanyians are ruled by a mostly-benevolent dictator, who grants the populace the freedom to live their own lives but watches carefully for anyone to slip up.

The medium-sized, corrupt, well-organized government prioritizes Defense, although Education, Law & Order, and Administration are also considered important, while International Aid and Social Policy aren't funded at all. It meets to discuss matters of state in the capital city of Wolfsburg. The average income tax rate is 53.1%, and even higher for the wealthy.

The frighteningly efficient My New-Germanyian economy, worth a remarkable 1,108 trillion platinium marks a year, is broadly diversified and dominated by the Arms Manufacturing industry, with significant contributions from Tourism, Information Technology, and Uranium Mining. Black market activity is rampant. State-owned companies are reasonably common. Average income is an impressive 154,905 platinium marks, and evenly distributed, with the richest citizens earning only 2.6 times as much as the poorest.

Royal princesses are recognizable by their plastic tiaras, pregnant hitchhikers with signs requesting rides to "competent care" are a common sight on My New-Germanyian roads, young girls often attend the same schools as their children, and putting a mustache on a banknote is considered defacing a national monument. Crime, especially youth-related, is totally unknown, thanks to a capable police force and progressive social policies in education and welfare. My New-Germany's national animal is the Imperial Eagle, which soars majestically through the nation's famously clear skies.

My New-Germany is ranked 2,351st in the world and 2nd in Republic of Conservative Nations for Largest Insurance Industry, scoring 8,034.31 on the Risk Expulsion Effectiveness Rating.