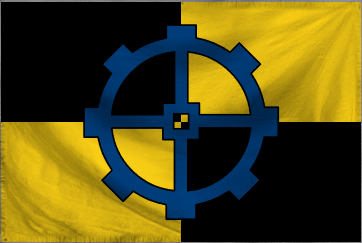 The Republic of Mungtang-e is a massive, genial nation, ruled by Bertram Ryley Anthonyson with an even hand, and remarkable for its suspicion of poets, complete absence of social welfare, and stringent health and safety legislation. The compassionate, hard-working population of 1.572 billion Mungtangans have some civil rights, but not too many, enjoy the freedom to spend their money however they like, to a point, and take part in free and open elections, although not too often.

The medium-sized government juggles the competing demands of Healthcare, Administration, and Education. It meets to discuss matters of state in the capital city of kane. The average income tax rate is 22.9%, but much higher for the wealthy.

The strong Mungtang-ean economy, worth 83.7 trillion won a year, is broadly diversified and led by the Information Technology industry, with major contributions from Woodchip Exports, Basket Weaving, and Door-to-door Insurance Sales. State-owned companies are common. Average income is 53,259 won, and evenly distributed, with the richest citizens earning only 2.2 times as much as the poorest.

Panels from bankrupt rooftop solar companies are used as props for sci-fi B-movies, children who display even minimal sporting aptitude are immediately assigned a personal trainer, Calvinball players are lost for days as they wander the vast halls of their new academies, and smoking is banned in public areas. Crime, especially youth-related, is totally unknown. Mungtang-e's national animal is the dog, which can occasionally be seen sifting through garbage in the nation's cities, and its national religion is mung-tang.

Mungtang-e is ranked 85,714th in the world and 1,985th in Balder for Largest Automobile Manufacturing Sector, scoring 2,597.01 on the Henry Ford Productivity Index.