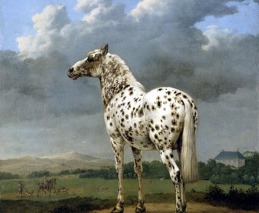 The Spotted Appaloosas of Mottlevania is a gargantuan, cultured nation, ruled by Spot with an iron fist, and remarkable for its triple-decker prams, public floggings, and irreverence towards religion. The hard-nosed, cynical, humorless population of 30.324 billion Mottlevanians are ruled by a mostly-benevolent dictator, who grants the populace the freedom to live their own lives but watches carefully for anyone to slip up.

The large, corrupt, well-organized government juggles the competing demands of Law & Order, Industry, and Administration. It meets to discuss matters of state in the capital city of Dapple. The average income tax rate is 60.1%, and even higher for the wealthy.

The frighteningly efficient Mottlevanian economy, worth a remarkable 2,836 trillion Spots a year, is fairly diversified and led by the Uranium Mining industry, with significant contributions from Woodchip Exports, Book Publishing, and Automobile Manufacturing. Black market activity is rampant. State-owned companies are reasonably common. Average income is 93,536 Spots, and distributed extremely evenly, with little difference between the richest and poorest citizens.

The military has declared war on all religious influence, the volume of paperwork used to complete a single environmental assessment defeats the purpose, airship use has soared while property values beneath their routes have plummeted, and Spot will only ring up foreign leaders if they agree to reverse the charges. Crime, especially youth-related, is totally unknown, thanks to a very well-funded police force and progressive social policies in education and welfare. Mottlevania's national animal is the Appaloosa, which teeters on the brink of extinction due to widespread deforestation.

Mottlevania is ranked 27,363rd in the world and 6th in Q102 for Most World Assembly Endorsements, with zero valid endorsements.