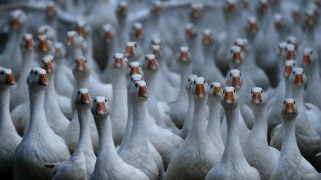 The Still Flying Flock of More Migrating Geese is a gargantuan, efficient nation, ruled by Papa Gander with an iron fist, and remarkable for its keen interest in outer space, compulsory military service, and suspicion of poets. The hard-nosed, hard-working, cynical population of 29.676 billion Geese are ruled by a mostly-benevolent dictator, who grants the populace the freedom to live their own lives but watches carefully for anyone to slip up.

The tiny, well-organized government juggles the competing demands of Law & Order, Industry, and Defense. It meets to discuss matters of state in the capital city of Honkville. The average income tax rate is 8.5%.

The powerhouse Goosed economy, worth a remarkable 2,226 trillion nest eggs a year, is broadly diversified and led by the Automobile Manufacturing industry, with major contributions from Tourism, Door-to-door Insurance Sales, and Arms Manufacturing. Average income is 75,017 nest eggs, with the richest citizens earning 5.3 times as much as the poorest.

Pictures of government employees with expensive Pearbooks 'working' on exotic beaches dominate local tabloids, farting etiquette is taught in schools, would-be emigrants are told "abandon all hope all ye who would exit here", and funeral directors are frequently looking at their watches during funerals. Crime, especially youth-related, is relatively low, thanks to a capable police force. More Migrating Geese's national animal is the feathered friend and its national religion is Catholicism.

More Migrating Geese is ranked 60,836th in the world and 4th in Travelling Region for Most Corrupt Governments, with 17.9 kickbacks per hour.