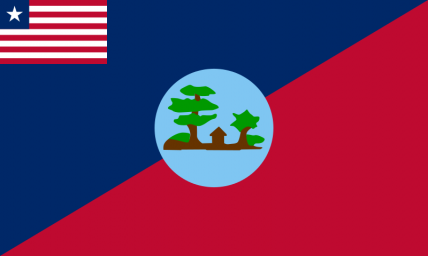 The Corruptocracy of Montserrado is a gargantuan, efficient nation, renowned for its national health service, enslaved workforce, and public floggings. The hard-nosed, hard-working, humorless population of 25.271 billion Montserradoans are either ruled by a sleek, efficient government or a conglomerate of multinational corporations; it's difficult to tell which.

The minute, corrupt, pro-business government, or what there is of one, is primarily concerned with Defense, with Industry also on the agenda, while Environment and Spirituality receive no funds. It meets to discuss matters of state in the capital city of Montserrado. Income tax is unheard of.

The frighteningly efficient Montserradoan economy, worth a remarkable 4,506 trillion dollars a year, is driven almost entirely by the private sector, which is broadly diversified and led by the Gambling industry, with major contributions from Arms Manufacturing, Soda Sales, and Information Technology. Average income is an impressive 178,321 dollars, but there is a vast disparity between incomes, with the richest 10% of citizens earning 1,385,567 per year while the poor average 5,944, a ratio of 233 to 1.

A girl's success in life is often linked to her performance in beauty pageants, bins outnumber trees in city parks, package deals offer tourists the chance to visit the frozen remains of the previous tour group, and toilet paper is considered a non-essential item in the embargo against Brasilistan. Crime, especially youth-related, is all-pervasive, probably because of the absence of a police force. Montserrado's national animal is the lion, which teeters on the brink of extinction due to widespread deforestation.

Montserrado is ranked 252,252nd in the world and 11th in The New Meritocracy for Most Patriotic, with 1.03 flags saluted per person per day.