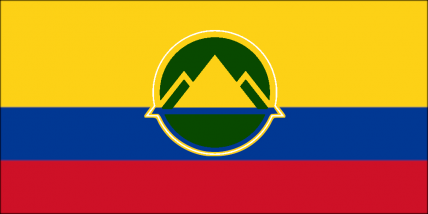 The Rainforest Republic of Montana Verde is a massive, cultured nation, notable for its museums and concert halls, pith helmet sales, and national health service. The hard-nosed, cynical, devout population of 3.175 billion Montana Verdeans are ruled by a mostly-benevolent dictator, who grants the populace the freedom to live their own lives but watches carefully for anyone to slip up.

The medium-sized government juggles the competing demands of Defense, Law & Order, and Education. It meets to discuss matters of state in the capital city of Santa Margarita. The average income tax rate is 33.4%.

The Montana Verdean economy, worth 178 trillion pesos a year, is driven entirely by a combination of government and state-owned industry, with private enterprise illegal. However, for those in the know, there is a slick, highly efficient, fairly diversified black market in Trout Farming, Beef-Based Agriculture, Gambling, and Basket Weaving. The private sector mostly consists of enterprising ten-year-olds selling lemonade on the sidewalk, but the government is looking at stamping this out. Average income is 56,353 pesos, with the richest citizens earning 5.3 times as much as the poorest.

Abortions are routinely performed in the nation's hospitals, welfare funding has recently gone through the roof, toast never burns but always has a weird chemical taste, and the needs of the living outweigh the needs of the dead. Crime, especially youth-related, is totally unknown, thanks to a capable police force and progressive social policies in education and welfare. Montana Verde's national animal is the llama, which frolics freely in the nation's many lush forests.