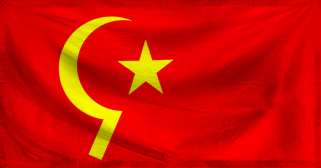 The Sultanate of Monkistan is a colossal, safe nation, ruled by Nelson Monkdela with a fair hand, and remarkable for its rum-swilling pirates, museums and concert halls, and daily referendums. The hard-nosed, hard-working, democratic, humorless population of 9.192 billion Monkistanis enjoy a sensible mix of personal and economic freedoms, while the political process is open and the people's right to vote held sacrosanct.

The relatively small, corrupt government juggles the competing demands of Education, Industry, and Environment. It meets to discuss matters of state in the capital city of Monkow. The average income tax rate is 4.3%, but much higher for the wealthy.

The frighteningly efficient Monkistani economy, worth a remarkable 2,569 trillion Denarii a year, is fairly diversified and led by the Tourism industry, with major contributions from Retail, Information Technology, and Book Publishing. Black market activity is notable. Average income is an amazing 279,577 Denarii, and evenly distributed, with the richest citizens earning only 2.1 times as much as the poorest.

Nelson Monkdela's told that love often manifests itself through homicidal four-lettered litanies, the nation is experiencing a severe shortage of sporting events, anti-government political posters adorn every building like wallpaper, and government-run screening operations remove embryos with severe genetic disorders. Crime, especially youth-related, is totally unknown. Monkistan's national animal is the Monkee, which frolics freely in the nation's many lush forests, and its national religion is Monkism.

Monkistan is ranked 1,656th in the world and 128th in Europe for Most World Assembly Endorsements, with 128 valid endorsements.