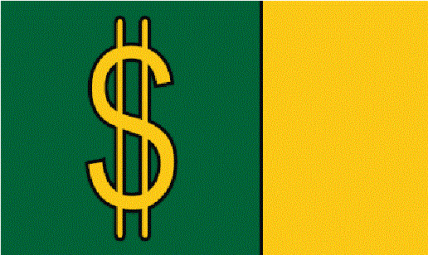 The Corporate Empire of Mon Goog is a massive, efficient nation, ruled by President and CEO with an even hand, and notable for its deadly medical pandemics, keen interest in outer space, and complete absence of social welfare. The hard-nosed, hard-working, humorless population of 1.925 billion Customers are either ruled by a sleek, efficient government or a conglomerate of multinational corporations; it's difficult to tell which.

The minute, corrupt, pro-business government, or what there is of one, is effectively ruled by the Department of Industry, although Administration is also considered important, while Environment and Welfare are ignored. It meets to discuss matters of state in the capital city of Commerce City. Citizens pay a flat income tax of 1.2%.

The frighteningly efficient Mon Googian economy, worth 387 trillion Goldbacks a year, is driven almost entirely by the private sector, which is broadly diversified and led by the Retail industry, with significant contributions from Gambling, Soda Sales, and Uranium Mining. Average income is an amazing 201,527 Goldbacks, but there is a vast disparity between incomes, with the richest 10% of citizens earning 1,839,585 per year while the poor average 2,436, a ratio of 755 to 1.

Balaclava manufacturers are held criminally culpable for bank heists, the same 1925 social media bloggers always loudly and immediately agree with President and CEO's every word on Twitcher, mournful opera fans place bouquets of roses at a 3000 capacity parking lot, and getting an infected tattoo is considered a rite of passage in Mon Goog. Crime, especially youth-related, is all-pervasive, perhaps because of the country's complete lack of prisons. Mon Goog's national animal is the Buck, which is also the nation's favorite main course, and its national religion is Mass Consumerism.

Mon Goog is ranked 34,878th in the world and 55th in Capitalist Paradise for Highest Drug Use, scoring 105 on the Pineapple Fondness Rating.