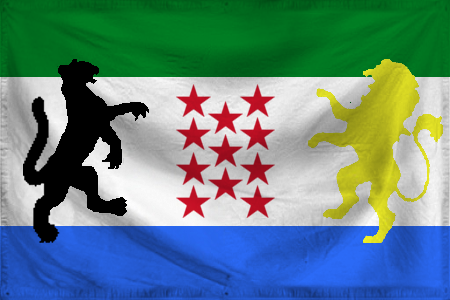 The People's Unified Federation of Mokastana is a gargantuan, cultured nation, ruled by POTF Ben Rodriguez with an even hand, and notable for its barren, inhospitable landscape, smutty television, and sprawling nuclear power plants. The hard-nosed, devout population of 31.233 billion Mokans have some civil rights, but not too many, enjoy the freedom to spend their money however they like, to a point, and take part in free and open elections, although not too often.

The enormous government juggles the competing demands of Defense, Education, and Social Policy. It meets to discuss matters of state in the capital city of Mokastana City. The average income tax rate is 95.7%.

The powerhouse Mokan economy, worth a remarkable 4,343 trillion Trabajoroes a year, is quite specialized and mostly made up of the Arms Manufacturing industry, with significant contributions from Book Publishing, Information Technology, and Gambling. State-owned companies are reasonably common. Average income is an impressive 139,062 Trabajoroes, and distributed extremely evenly, with little difference between the richest and poorest citizens.

Popular cartoon characters frequently appear in government-sponsored PSAs reminding students to say no to drugs, invasive drug testing is now performed at elementary school sports days, the nation's orphanages and maternity wards have been nicknamed 'the Killbot Factories', and Mokan police have to pay out of their own pockets for bulletproof vests. Crime is totally unknown, thanks to a well-funded police force and progressive social policies in education and welfare. Mokastana's national animal is the Jaguar, which is also the nation's favorite main course.

Mokastana is ranked 211,668th in the world and 39th in Greater Dienstad for Most Primitive, scoring -242.13 on the Scary Big Number Scale.