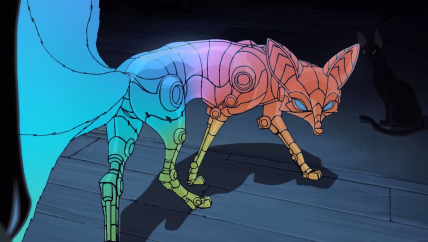 The Metal Fox of Miravana is a colossal, genial nation, ruled by Oat with an even hand, and notable for its museums and concert halls, daily referendums, and stringent health and safety legislation. The compassionate population of 8.885 billion Miravanese are fiercely patriotic and enjoy great social equality; they tend to view other, more capitalist countries as somewhat immoral and corrupt.

The large government juggles the competing demands of Law & Order, Education, and Environment. It meets to discuss matters of state in the capital city of Greater Lanton. The average income tax rate is 68.2%, and even higher for the wealthy.

The powerhouse Miravanan economy, worth 732 trillion Miravanan Dollars a year, is driven entirely by a combination of government and state-owned industry, with private enterprise illegal. The industrial sector, which is quite specialized, is led by the Information Technology industry, with significant contributions from Book Publishing, Arms Manufacturing, and Basket Weaving. Average income is 82,392 Miravanan Dollars, and distributed extremely evenly, with little difference between the richest and poorest citizens.

Charged suspects often have to wait years before the courts have room to judge their trial, anything is permissible when wearing latex gloves, women who can do math in their head are burned for witchcraft, and animal control is going door-to-door releasing all pets back into the wild. Crime, especially youth-related, is totally unknown, thanks to a very well-funded police force and progressive social policies in education and welfare. Miravana's national animal is the Otter, which frolics freely in the nation's sparkling oceans.

Miravana is ranked 14,585th in the world and 5th in Japan for Largest Publishing Industry, scoring 9,575.23 on the Bella Potter Productivity e-Index.