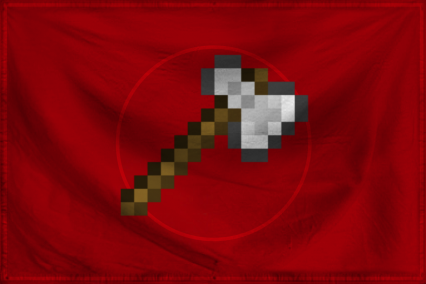 The Democratic Republic of Minecraftiana is a colossal, cultured nation, ruled by President Drakonas with an even hand, and renowned for its daily referendums, hatred of cheese, and punitive income tax rates. The compassionate, hard-working, cheerful population of 6.381 billion Minecraftians have some civil rights, but not too many, enjoy the freedom to spend their money however they like, to a point, and take part in free and open elections, although not too often.

The large government juggles the competing demands of Administration, Education, and Environment. It meets to discuss matters of state in the capital city of Beacontown. The average income tax rate is 96.9%.

The frighteningly efficient Minecraftian economy, worth a remarkable 1,138 trillion Emeralds a year, is quite specialized and mostly made up of the Information Technology industry, with significant contributions from Tourism and Book Publishing. State-owned companies are reasonably common. Average income is an impressive 178,371 Emeralds, and evenly distributed, with the richest citizens earning only 2.4 times as much as the poorest.

The most penniless demographics have by far the highest number of researchers per capita, droves of former desperados are applying to join the border police, citizens are regularly found digging for treasure in their gardens, and Occam's razor has sliced to pieces any childhood belief in Santa Claus and the Tooth Fairy. Crime, especially youth-related, is totally unknown. Minecraftiana's national animal is the Creeper, which frolics freely in the nation's many lush forests.

Minecraftiana is ranked 3,060th in the world and 119th in Osiris for Most Developed, scoring 96.51 on the Human Development Index.