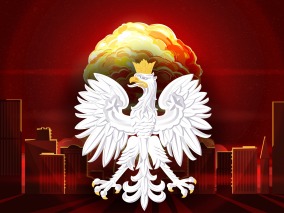 The Once and Future Osiran of Mghnb is a gargantuan, orderly nation, ruled by Supreme Dictator Michał Kozłowski with an iron fist, and remarkable for its keen interest in outer space, parental licensing program, and suspicion of poets. The hard-nosed, hard-working, cynical, humorless, devout population of 12.27 billion Mghnbians are kept under strict control by the oppressive government, which measures its success by the nation's GDP and refers to individual citizens as "human resources."

The medium-sized, corrupt, moralistic, well-organized government prioritizes Defense, although Law & Order, Industry, and Healthcare are also considered important, while Social Policy and Welfare aren't funded at all. It meets to discuss matters of state in the capital city of Mghnb City. The average income tax rate is 83.2%, and even higher for the wealthy.

The frighteningly efficient Mghnbian economy, worth a remarkable 3,435 trillion Cashes a year, is broadly diversified and mostly comprised of black market activity, especially in Arms Manufacturing, Information Technology, Retail, and Woodchip Exports. State-owned companies are reasonably common. Average income is an amazing 280,001 Cashes, and evenly distributed, with the richest citizens earning only 2.0 times as much as the poorest.

The police think a properly conducted criminal investigation is a real pain, former first wives now find themselves mothers to twenty children, the optimally efficient parking strategy for business commuters is referred to as the "traveling salesman problem", and international trade can be a pain to deal with. Crime, especially youth-related, is totally unknown, thanks to a well-funded police force and progressive social policies in education and welfare. Mghnb's national animal is the Great White Shark, which is also the nation's favorite main course, and its national religion is Mghnbian Apocalyptic Cult.

Mghnb is ranked 242,814th in the world and 10,235th in Osiris for Most Rebellious Youth, scoring -53 on the Stark-Dean Displacement Index.