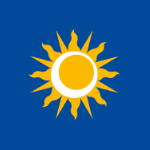 The Community of Megelan is a gargantuan, socially progressive nation, ruled by Captain of the People Giovanni Capra with an even hand, and remarkable for its pith helmet sales, free-roaming dinosaurs, and absence of drug laws. The hard-nosed, hard-working, humorless, devout population of 10.292 billion Meᵹelanese have some civil rights, but not too many, enjoy the freedom to spend their money however they like, to a point, and take part in free and open elections, although not too often.

The enormous government juggles the competing demands of Environment, Education, and Industry. It meets to discuss matters of state in the capital city of Vergate sul Membro. The average income tax rate is 67.8%, and even higher for the wealthy.

The frighteningly efficient Meᵹelanese economy, worth 752 trillion Meᵹelanese pounds a year, is highly specialized and led by the Arms Manufacturing industry, with significant contributions from Book Publishing, Tourism, and Cheese Exports. Black market activity is rampant. Average income is 73,076 Meᵹelanese pounds, and evenly distributed, with the richest citizens earning only 2.1 times as much as the poorest.

Children as young as eight can be found working in factories, people who do not complete their community service are sentenced to more community service, power stations shutting down at night has made bedtime reading tricky, and tourists call Meᵹelanese beach towns "the fine coastline". Crime is all-pervasive, perhaps because of the country's complete lack of prisons. Megelan's national animal is the Half-woollen boar, which is also the nation's favorite main course, and its national religion is Witchcraft.

Megelan is ranked 185,145th in the world and 24th in Tyran for Most Extreme, scoring 6.14 on the Paul-Nader Subjective Decentrality Index.