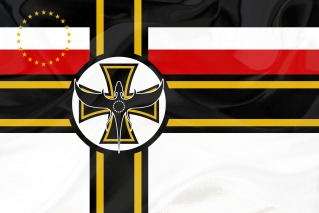 The Großreich of Meackers is a gargantuan, cultured nation, ruled by Sir Winsenberg with an even hand, and notable for its strictly enforced bedtime, keen interest in outer space, and devotion to social welfare. The hard-nosed, democratic, humorless population of 11.898 billion Meackersians have some civil rights, but not too many, enjoy the freedom to spend their money however they like, to a point, and take part in free and open elections, although not too often.

The large, corrupt government juggles the competing demands of Defense, Education, and Industry. It meets to discuss matters of state in the capital city of Neo'Centralshia. The average income tax rate is 94.8%.

The frighteningly efficient Meackersian economy, worth a remarkable 2,579 trillion Federal Dollars a year, is quite specialized and mostly comprised of black market activity, especially in Information Technology, Arms Manufacturing, Tourism, and Book Publishing. State-owned companies are reasonably common. Average income is an amazing 216,836 Federal Dollars, and distributed extremely evenly, with little difference between the richest and poorest citizens.

Vegetables are crisper thanks to CRISPR, the intelligence community is playing 4-D chess with an imaginary spy network, kindergartners' favourite dance move is the stop-drop-and-roll, and money grows on trees. Crime, especially youth-related, is totally unknown. Meackers's national animal is the Pale Dragon, which is also the nation's favorite main course.

Meackers is ranked 213,185th in the world and 846th in Europeia for Largest Trout Fishing Sector, scoring -5.37 on the Nemo Depletion Efficiency Index.

The United Peoples of Centrism, and 7 others.