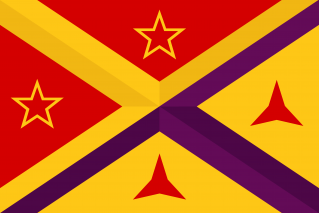 The Red Fleet Marines of Lyrical International Brigade is a gargantuan, safe nation, ruled by Compadre Mika Etchebéhère with a fair hand, and notable for its complete lack of prisons, absence of drug laws, and devotion to social welfare. The hard-nosed, democratic population of 10.076 billion Brigadieres Lyricales are free to do what they want with their own bodies, and vote for whomever they like in elections; if they go into business, however, they are regulated to within an inch of their lives.

The medium-sized, liberal, socially-minded, outspoken government prioritizes Welfare, with Defense, Education, and Administration also on the agenda, while Spirituality is ignored. It meets to discuss matters of state in the capital city of Ciudád Durruti. The average income tax rate is 34.2%, but much higher for the wealthy.

The large but inefficient Lyricál economy, worth 457 trillion libras a year, is broadly diversified and led by the Automobile Manufacturing industry, with major contributions from Beef-Based Agriculture, Pizza Delivery, and Soda Sales. State-owned companies are common. Average income is 45,375 libras, and distributed extremely evenly, with little difference between the richest and poorest citizens.

Election ballot papers are so long that unused ones are recycled as toilet roll, paper and ink publications are subsidised by the government to keep them in the black, the nation's only university is the School of Hard Knocks, and laser-wielding robots are taking aim at human hearts. Crime is totally unknown. Lyrical International Brigade's national animal is the cerdo azul, which frolics freely in the nation's many lush forests, and its national religion is absolutamente nada.

Lyrical International Brigade is ranked 45,516th in the world and 80th in The Internationale for Most World Assembly Endorsements, with zero valid endorsements.