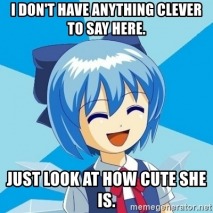 The Dystopian Harmony ❄️ of Luksusowa is a gargantuan, orderly nation, ruled by Lord God Master Cirno with an iron fist, and notable for its frequent executions, infamous sell-swords, and smutty television. The compassionate, cynical, humorless population of 15.632 billion Faeries are ruled with an iron fist by the dictatorship government, which ensures that no-one outside the party gets too rich. In their personal lives, however, citizens are relatively unoppressed; it remains to be seen whether this is because the government genuinely cares about its people, or if it hasn't gotten around to stamping out civil rights yet.

The enormous, corrupt, well-organized government juggles the competing demands of Defense, Education, and Law & Order. It meets to discuss matters of state in the capital city of Kostroma. The income tax rate is 100%.

The frighteningly efficient Luksusowan economy, worth a remarkable 5,544 trillion Vodkas a year, is driven entirely by a combination of government and state-owned industry, with private enterprise illegal. The industrial sector, which is quite specialized, is led by the Information Technology industry, with significant contributions from Tourism, Arms Manufacturing, and Book Publishing. Average income is an amazing 354,706 Vodkas, and distributed extremely evenly, with practically no difference between the richest and poorest citizens.

EULAs remind customers that "Private Mode" is a browser setting rather than a promise, military officers are given medals for disobeying orders, adults have never outgrown their fear of monsters, and the saying 'break a leg' is now taken literally. Crime is totally unknown, thanks to a very well-funded police force and progressive social policies in education and welfare. Luksusowa's national animal is the Potato, which frolics freely in the nation's many lush forests, and its national religion is outlawed in public locations.