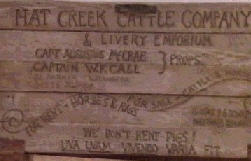 The Texas Rangers of Lonesome Dove is a gargantuan, efficient nation, ruled by Cal with an even hand, and remarkable for its barren, inhospitable landscape, compulsory gun ownership, and spontaneously combusting cars. The hard-nosed, hard-working, democratic population of 34.888 billion broken down cowboys are either ruled by a sleek, efficient government or a conglomerate of multinational corporations; it's difficult to tell which.

The tiny, pro-business government prioritizes Industry, although Defense and Law & Order are also considered important, while Social Policy and Environment receive no funds. Citizens pay a flat income tax of 4.7%.

The frighteningly efficient Lonesome Dovean economy, worth a remarkable 3,651 trillion silver dollars a year, is driven almost entirely by the private sector, which is broadly diversified and led by the Information Technology industry, with major contributions from Automobile Manufacturing, Arms Manufacturing, and Soda Sales. Average income is an impressive 104,656 silver dollars, but there is a vast disparity between incomes, with the richest 10% of citizens earning 708,296 per year while the poor average 5,701, a ratio of 124 to 1.

Human tissue is grown in vats as a delicacy as well as for transplants, prison visits increase substantially during election years, graffiti graces every city's streets, and immigrants are required to salute the flag five times a day. Crime is a serious problem, with the police force struggling against a lack of funding and a high mortality rate. Lonesome Dove's national animal is the buffalo, which teeters on the brink of extinction due to widespread deforestation.