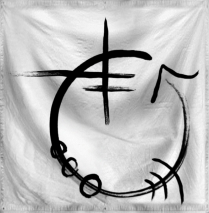 The Dictatorship of Lone survivers is a massive, safe nation, ruled by one of us with an even hand, and notable for its museums and concert halls, compulsory vegetarianism, and irreverence towards religion. The compassionate, democratic population of 2.532 billion alivers are fiercely patriotic and enjoy great social equality; they tend to view other, more capitalist countries as somewhat immoral and corrupt.

It is difficult to tell where the omnipresent, socially-minded government stops and the rest of society begins, but it prioritizes Education, although Healthcare, Welfare, and Administration are also considered important, while Defense and Spirituality receive no funds. It meets to discuss matters of state in the capital city of The Vault. The average income tax rate is 87.8%, and even higher for the wealthy.

The still alive economy, worth 130 trillion worthlesses a year, is driven almost entirely by government activity, with private enterprise illegal. The industrial sector is solely comprised of the Information Technology industry. State-owned companies are the norm. Average income is 51,613 worthlesses, and distributed extremely evenly, with practically no difference between the richest and poorest citizens.

The nation's politicians are acknowledged as the most polite in the region to the dismay of comedians everywhere, late night talk show hosts are having a field day over one of us's questionably sane new coalition partners, cogitators and mass debaters are skiving off work to hang around the National Symposium Park, and children wondering what happens to pets after they die are shown where the compost heap is. Crime, especially youth-related, is totally unknown, thanks to a well-funded police force and progressive social policies in education and welfare. Lone survivers's national animal is the cockroach, which frolics freely in the nation's many lush forests, and its national religion is Atheism.

Lone survivers is ranked 167,136th in the world and 2nd in The Revolutionary Front for Largest Soda Pop Sector, scoring -5.2 on the Addison-Fukk Productivity Rating.