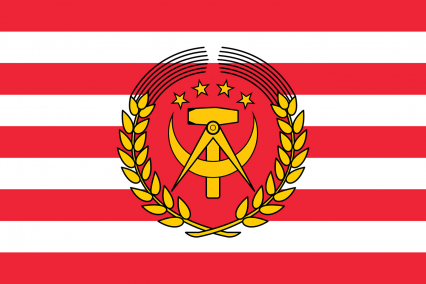 The Communist Republic of Linkers Sha is a massive, safe nation, ruled by Bung Petrus with an iron fist, and renowned for its unlimited-speed roads, ubiquitous missile silos, and stringent health and safety legislation. The hard-nosed, cynical population of 3.304 billion Linkers Shans are ruled by a mostly-benevolent dictator, who grants the populace the freedom to live their own lives but watches carefully for anyone to slip up.

The medium-sized, corrupt, well-organized government juggles the competing demands of Education, Defense, and Administration. It meets to discuss matters of state in the capital city of Linker City. The average income tax rate is 84.0%, and even higher for the wealthy.

The frighteningly efficient Linkers Shan economy, worth 639 trillion Rs a year, is driven entirely by a combination of government and state-owned industry, with private enterprise illegal. The industrial sector, which is broadly diversified, is led by the Information Technology industry, with significant contributions from Arms Manufacturing, Beef-Based Agriculture, and Tourism. Average income is an impressive 193,648 Rs, and distributed extremely evenly, with little difference between the richest and poorest citizens.

Internal strife within the Red Bloc crumbles in the face of fiery rhetoric, books are so highly regarded in Linkers Sha that libraries are often revered as holy shrines, children have nightmares about the eerie red glow and constant whirring of newly-installed machines, and rare steaks seem even bluer now. Crime, especially youth-related, is totally unknown, thanks to a capable police force and progressive social policies in education and welfare. Linkers Sha's national animal is the Komodo Dragon, which frolics freely in the nation's many lush forests, and its national religion is Makmurian.

Linkers Sha is ranked 39,878th in the world and 151st in The Free Nations Region for Safest, scoring 104.45 on the Bubble-Rapp Safety Rating.

The Egalitarian Dominion of Yutes,