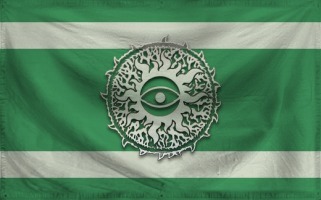 The Empire of Layarteb is a gargantuan, safe nation, ruled by the Emperor with an even hand, and remarkable for its aversion to nipples, anti-smoking policies, and keen interest in outer space. The hard-nosed, humorless population of 36.549 billion Layartebians have some civil rights, but not too many, enjoy the freedom to spend their money however they like, to a point, and take part in free and open elections, although not too often.

The tiny government juggles the competing demands of Defense, Law & Order, and Education. It meets to discuss matters of state in the capital city of Layarteb City. Income tax is unheard of.

The frighteningly efficient Layartebian economy, worth a remarkable 7,934 trillion shingrots a year, is led by the Arms Manufacturing industry, with significant contributions from Information Technology, Uranium Mining, and Book Publishing. State-owned companies are common. Average income is an amazing 217,089 shingrots, and evenly distributed, with the richest citizens earning only 2.8 times as much as the poorest.

The Emperor's told that love often manifests itself through homicidal four-lettered litanies, straitjackets are a common religious garb, most people learn to drive on crash courses, and teenagers are making eye contact with each other for the first time in years. Crime, especially youth-related, is totally unknown, thanks to a well-funded police force. Layarteb's national animal is the falcon, which teeters on the brink of extinction due to toxic air pollution.

Layarteb is ranked 205,285th in the world and 58th in New York for Most Cheerful Citizens, with 5.6 Percentage Of Water Glasses Perceived Half-Full.