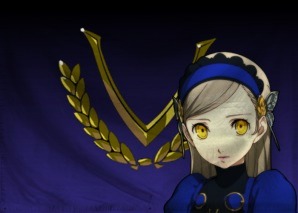 The Persona of
Lavenza
Inoffensive Centrist Democracy
I am thou, Thou art I.
Influence
Dominator
Scribe
Region
The Velvet Room
Civil Rights
Below Average
Economy
Good
Political Freedom
Below Average

The Persona of Lavenza is a colossal, safe nation, renowned for its aversion to nipples, compulsory military service, and irreverence towards religion. The hard-working population of 5.799 billion Phantom Thieves have some civil rights, but not too many, enjoy the freedom to spend their money however they like, to a point, and take part in free and open elections, although not too often.

The medium-sized government juggles the competing demands of Defense, Welfare, and Law & Order. The average income tax rate is 31.0%.

The distorted economy, worth 256 trillion yen a year, is led by the Arms Manufacturing industry, with major contributions from Pizza Delivery, Book Publishing, and Retail. Average income is 44,173 yen, and evenly distributed, with the richest citizens earning only 4.2 times as much as the poorest.

Nursing mothers are often arrested for indecent exposure, governments opposing Lavenza are beset by rebels, bars are packed at all hours, and farm turkeys are given high doses of antidepressants to take their minds off the holiday season. Crime, especially youth-related, is totally unknown, thanks to a well-funded police force and progressive social policies in education and welfare. Lavenza's national animal is the shadow, which can occasionally be seen sifting through garbage in the nation's cities.

Lavenza is ranked 38,212th in the world and 1st in The Velvet Room for Largest Welfare Programs, scoring 2,240.29 on the Safety Net Mesh Density Rating.