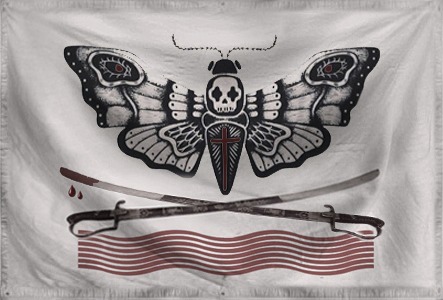 The Watchfires of Laughing Swordfish is a gargantuan, efficient nation, remarkable for its barren, inhospitable landscape, compulsory military service, and smutty television. The hard-nosed, hard-working, cynical, devout population of 10.519 billion Laughing Swordfishians are kept under strict control by the oppressive government, which measures its success by the nation's GDP and refers to individual citizens as "human resources."

The all-consuming Laughing Swordfishian economy, worth 843 trillion $$s a year, is broadly diversified and led by the Arms Manufacturing industry, with significant contributions from Automobile Manufacturing, Uranium Mining, and Basket Weaving. Average income is 80,217 $$s, with the richest citizens earning 5.1 times as much as the poorest.

100-year-old politicians are now a thing of the past, the Laughing Swordfish Automotive Racing Series draws millions of spectators annually while those near the tracks complain about the noise, lawyers turn down litigation cases and corporate work in order to focus on lucrative public defence work, and government-sponsored gallows are being erected by Violetist temples. Crime, especially youth-related, is totally unknown, thanks to a capable police force. Laughing Swordfish's national animal is the Acherontia styx, which teeters on the brink of extinction due to toxic air pollution.

Laughing Swordfish is ranked 39,213th in the world and 1st in Imperial Sovereign Realms Army for Most Influential, scoring 715 on the Soft Power Disbursement Rating.

Most Recent Government Activity: 52 days ago