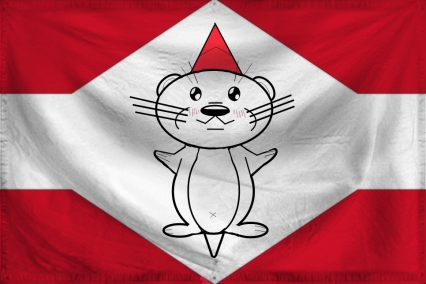 The Kingdom of Laseri is a massive, genial nation, ruled by Sera with a fair hand, and notable for its frequent executions, state-planned economy, and pith helmet sales. The compassionate, democratic population of 2.328 billion Laserians love a good election, and the government gives them plenty of them. Universities tend to be full of students debating the merits of various civil and political rights, while businesses are tightly regulated and the wealthy viewed with suspicion.

The enormous, socially-minded, outspoken government juggles the competing demands of Administration, Education, and Healthcare. It meets to discuss matters of state in the capital city of Lyphreniya. The average income tax rate is 79.1%, and even higher for the wealthy.

The all-consuming Laserian economy, worth 222 trillion seis a year, is driven entirely by a combination of government and state-owned industry, with private enterprise illegal. The industrial sector, which is quite specialized, is led by the Tourism industry, with major contributions from Information Technology, Beef-Based Agriculture, and Cheese Exports. Average income is 95,449 seis, and distributed extremely evenly, with practically no difference between the richest and poorest citizens.

Bus ads propagandize causes ranging from sexual revolution to religious pogroms, dictionary sales have hit an all-time high, advertisements for jobs in the sciences run in fashion magazines, and Laserians incessantly needle their doctors for relief. Crime, especially youth-related, is totally unknown, thanks to a very well-funded police force and progressive social policies in education and welfare. Laseri's national animal is the otter, which frolics freely in the nation's sparkling oceans.

Laseri is ranked 241,143rd in the world and 253rd in Spiritus for Highest Unexpected Death Rate, scoring 20.21 on the Bus Surprisal Index.