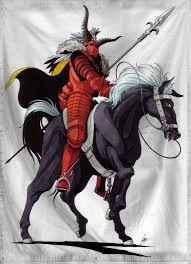 The Chiefdom of Kyraina is a gargantuan, cultured nation, ruled by Chief Eligor with a fair hand, and renowned for its daily referendums, public floggings, and unlimited-speed roads. The compassionate, hard-working, democratic, cheerful, devout population of 22.563 billion Kyrainians hold their civil and political rights very dear, although the wealthy and those in business tend to be viewed with suspicion.

The large government juggles the competing demands of Healthcare, Defense, and Education. It meets to discuss matters of state in the capital city of Kyrain City. The average income tax rate is 50.5%, and even higher for the wealthy.

The frighteningly efficient Kyrainian economy, worth a remarkable 1,706 trillion Golden Bears a year, is highly specialized and mostly made up of the Tourism industry, with major contributions from Book Publishing. State-owned companies are common. Average income is 75,648 Golden Bears, and distributed extremely evenly, with little difference between the richest and poorest citizens.

Jennifer Government is a bestseller, plain-clothes police officers follow Dàguó tourists everywhere they go, political candidates who don't release their birth certificates are presumed to have been born in Maxtopia, and quiet professionalism has returned to the nation's armed forces. Crime, especially youth-related, is totally unknown, thanks to a capable police force and progressive social policies in education and welfare. Kyraina's national animal is the Brown Bear, which frolics freely in the nation's many lush forests, and its national religion is None.

Kyraina is ranked 270,154th in the world and 58th in Hell for Largest Automobile Manufacturing Sector, scoring -14.83 on the Henry Ford Productivity Index.