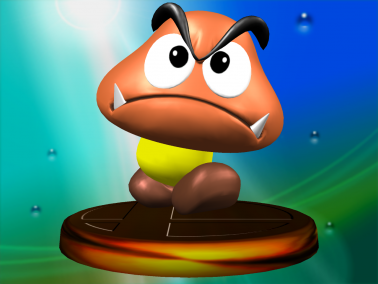 The Kingdom of Kuribo is a gargantuan, cultured nation, ruled by Bowser with an even hand, and renowned for its otherworldly petting zoo, rampant corporate plagiarism, and spontaneously combusting cars. The hard-nosed, hard-working, humorless, devout population of 13.519 billion Kuribans are either ruled by a sleek, efficient government or a conglomerate of multinational corporations; it's difficult to tell which.

The relatively small, corrupt government prioritizes Defense, although Industry, Law & Order, and Administration are also considered important, while Environment and Welfare receive no funds. It meets to discuss matters of state in the capital city of Bowser's Castle. Citizens pay a flat income tax of 30.2%.

The frighteningly efficient Kuriboan economy, worth a remarkable 4,378 trillion Coins a year, is broadly diversified and led by the Arms Manufacturing industry, with major contributions from Retail, Information Technology, and Gambling. Black market activity is rampant. Average income is an amazing 323,849 Coins, but there is a large disparity between incomes, with the richest 10% of citizens earning 1,679,500 per year while the poor average 33,835, a ratio of 49.6 to 1.

People with political aspirations study how to make balloon animals, the nation tends not to learn from its history, crime is on the rise as online youths compete to vlog the most shocking scenes of violence, and employers are never quite sure if graduates' qualifications have any merit or meaning. Crime, especially youth-related, is totally unknown, thanks to a capable police force and progressive social policies in education and welfare. Kuribo's national animal is the Piranha Plant, which is also the nation's favorite main course, and its national religion is Peach.

Kuribo is ranked 269,376th in the world and 12,473rd in The East Pacific for Most Beautiful Environments, with 1.92 pounds of wildlife per square mile.