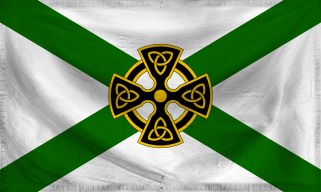 The Fiannria Commonwealth of Kuhlfros is a gargantuan, socially progressive nation, ruled by President Lucas Hoch with a fair hand, and renowned for its museums and concert halls, otherworldly petting zoo, and daily referendums. The hard-nosed, hard-working, democratic, humorless, devout population of 21.128 billion Fiannans hold their civil and political rights very dear, although the wealthy and those in business tend to be viewed with suspicion.

The medium-sized government prioritizes Education, with Industry, Healthcare, and Environment also on the agenda, while Spirituality and Welfare are ignored. It meets to discuss matters of state in the capital city of Bridhavn. Citizens pay a flat income tax of 75.0%.

The frighteningly efficient Kuhlfrosian economy, worth a remarkable 3,194 trillion Talers a year, is quite specialized and mostly made up of the Information Technology industry, with significant contributions from Arms Manufacturing and Tourism. State-owned companies are reasonably common. Average income is an impressive 151,195 Talers, with the richest citizens earning 5.7 times as much as the poorest.

The nation is relieved that all of the recent madness has finally come to an end, foreign football clubs wave the Kuhlfrosian flag before every game, the nation's democracy attracts huddled masses yearning to breathe free, and school uniforms are compulsory. Crime is totally unknown, thanks to a capable police force and progressive social policies in education and welfare. Kuhlfros's national animal is the Gryphon, which frolics freely in the nation's many lush forests, and its national religion is Roman Catholicism.

Kuhlfros is ranked 203,803rd in the world and 15th in Greater Ixnay for Largest Timber Woodchipping Industry, scoring -4.9 on the Tasmanian Pulp Environmental Export Index.